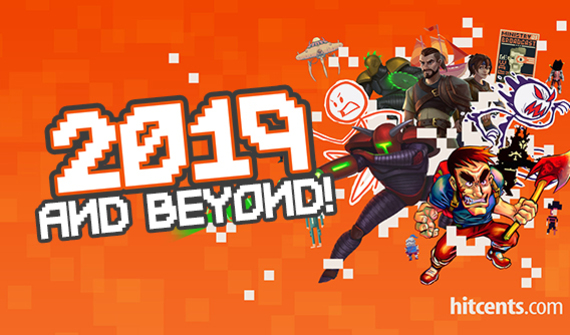 2019 came at us with all the momentum of a kid barreling downhill on a tricycle without brakes—both exhilarating and a little bit frenzied. However, Hitcents has an arsenal of legendary things planned for the year! To prepare for this, we’ve been steadily growing our team, honing our skills, and eating lots of snacks to increase our efficiency outputs.

One of the perks of our growing team is that we’re able to work with even more indie devs than ever before—meaning more sweet indie games! While last year was very good to us with Hitcents selling over 50,000 digital copies on the Nintendo SwitchTM alone, this year we’re setting an ambitious goal of 500,000 copies sold across all platforms, including a physical release or two! Below we have a sneak peek of what you can expect from us over the course of 2019 (and early 2020).

Hitcents is dramatically increasing the amount of indie games that we’re helping some top-notch devs publish this year! We’re grinding hard to bring their high-quality and diverse indies to the market. In the words of our studio head, Jordan Taylor, “We’re pretty lucky; we’ve partnered with some really talented game dev peeps. Wait—don’t write that. Put something more professional than ‘peeps’.”

Now, for the juicy game line-up. First off, here is a list of our officially-announced titles:

We also have a handful of games that we’re keeping close to our bosom and haven’t announced just yet. Rest assured, those games are pretty amaze-balls and you’ll get to hear more about them soon (kiddos on our Discord will be the first to know hint hint). You’ll also be able to play three of those unannounced babies if you come see us at the super cool event we talk about below.

Our first field-trip of the year is taking us to Boston for PAX East 2019! Come see us March 28th-31st at one of the largest gaming conventions in the world. We’ll be stocked up to our faces with neat goodies, as well as having NINE game demos for expo goers to play—the five titles mentioned above, three of our as-yet-unannounced games, and one of our previously released titles, A Robot Named Fight!, that you’ll definitely want to get your brain on.

An additional mission of ours while we work this behemoth event is to meet and connect with amazing new game developers and content creators. We love supporting the growing indie game community however we can, whether that be via linking up with game developers themselves or streamers working on growing their channels. So, be sure to meander by Booth #21019 (if you look at the official PAX East map, we'll be in the upper-right corner) and check out all the awesome things. Crisp high fives and hand sanitizer will be doled out in surplus.

If you can’t make it to PAX East to see us, there are also a few other conventions blooping on our radar! Be sure to tune in to our Discord for future event info.

One of Hitcents’ main goals this year is to build an amazing community focused on promoting and supporting indie games. With that in mind, we have been putting in MAXIMUM EFFORT to socially connect with all of the cool people who love video games just as much as we do. One of the main ways we want to accomplish this is through our newly-verified Discord! Chat directly with us and the devs about games, life, food, music, memes, and more. We also love to reveal exciting new things early and hosting Discord-exclusive giveaways with our Discord kiddos, so you’ll have access to a lot of nifty things about our games before anyone else, with a good chance at scoring some treats.

Special shoutout to our only non-office Discord moderator, Swordslash (full Discord handle Swordslash#1108)! We wouldn’t be anywhere without his faithful tutelage, insight, and experience with all the ins and outs of Discord wizardry, as well as his booty-kicking modding intuition. He’s saved us from our own naivete multiple times and has vigilantly protected us from a few raids. That’s not even to mention his active involvement in conversations and shenanigans with our other Discord members. Get yourself a Swordslash, guys.

In addition to a fantastic Discord family, Hitcents has really enjoyed working with some ballin’ content creators on Twitch! This is the kinda friends-with-benefits relationship that helps spread some supremo indie game lovin’ while we get to support growing streamers. Here are some of our favorites:

We are also making energetic attempts at being Twitter comedians! We love getting more involved with and being a part of the active Twitter gaming crowd, especially the bomb indie community that Twitter has managed to accrue. One of the main officiandos of the gaming scene is @JPSwitchmania, who is definitely one of our favorite Twitter personalities. JP hosts giveaways, conducts interviews, and writes reviews on Switch-centric games. We’ve had the pleasure of interacting with him quite a bit and so far he has interviewed our studio head, Jordan Taylor; interviewed the Shores Unknown game developer, Ilya; and conducted a pretty popular giveaway for us! We’re looking forward to working with him and #SwitchCorps (a Nintendo Switch focused collector group) more in the future on our heckin’ exciting physical release (possibly in the plural). Feel free to give us a follow @Hitcents, send us your <3’s, and tag us in anything you think we might dig. We like to think we’re finally getting the hang of hashtags. #arewecoolyet?

Alright guys, there you have it. We’ve been eating our veggies, drinking appropriate amounts of fluids, and taking our vitamins—we’re ready to hulk-out and publish some indies! If you have any questions about any of this neat stuff, don’t be a stranger; you can always contact us via Discord and Twitter or you can email us as press@hitcents.com if you’d prefer something more formal (or if you’re planning on writing a reeeally long message).