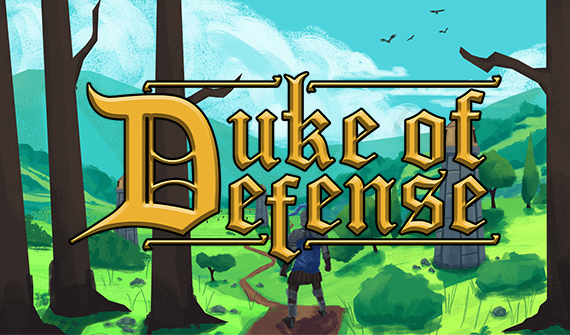 Duke of Defense coming to Steam and Nintendo Switch

Developers so nice, we partnered with ‘em twice! Sebastian Nigro and Christopher Anselmo (creators of Don't Sink) have drawn up battleplans on Duke of Defense, a brand new action-driven tower defense game unlike any you’ve played before!

Available now via Steam Early Access, Duke of Defense will have you slashing, dashing, rolling, laughing, upgrading, and a whole host of other knightly duties. The current version on Steam is in beta (join our Beta Tester community!), but a full early-2019 release is planned for Nintendo Switch and Steam!

Duke of Defense bestows the noble tower defense genre with combat, multiplayer, and wit. Discover a world brimming with humor, interesting characters, and adventure. Prattle on with cheeky villagers and egotistical wizards. Find yourself in a role more significant than a knight could ever dream of! Slash goblins, ogres, wizards, and more with your trusty sword, roll through waves of enemies, and build towers as fast as you can. Reap the rewards of combat by collecting coins from fallen foes, but tread carefully so as not to get walloped on the field of action!

Fire Mage would probably be upset if I call his squeak cute.

Brace for attack by fortifying your defenses using strategically-positioned towers, each tower more unique and specialized than the last. If you're a bit too claustrophobic for the traditional knight's helmet, venture to the store and browse the wardrobe. Upgrade your character as you advance through the story with a plethora of enhancements available within the skill tree. These abilities also apply in co-op mode, so everybody benefits! Unique towers, potent powers, 8-bit flowers, and as-yet-unannounced game modes ensure you'll be back for more. Oh my!

So many towers, so little time.

The whole experience is wrapped up in an unbelievable composition containing everything from sweat-inducing chiptunes to comedic ambience. The soundtrack currently features more than 10 songs, and will surpass 20 by the time the game is completed. Expect even more beeps, boops, noises, and songs with each update!

A limited number of keys will be distributed to qualified content creators via Woovit.

To learn more about Duke of Defense and stay up-to-date on all our other news, follow us on Twitter and join our official Discord!