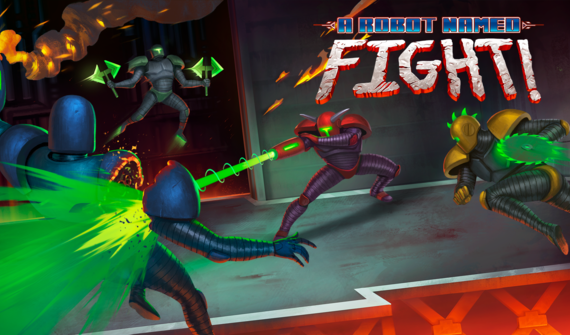 You fought the Megabeast... now fight your friends!

A Robot Named Fight!: Deathmatch Update is here for the Nintendo Switch, available digitally via the Nintendo eShopTM. Experience the fan-favorite roguelike metroidvania in a fresh new way with the Deathmatch Update, a 2-4 player local split-screen Fight-fest! With a plethora of artifacts to nab, five new weapons-packed arenas for battle, and settings to alter your gameplay, grab a Joy-ConTM and join the fray! Blast your friends or blast your foes, but let no Fight go unfought! When everybody else is tired of losing, dig into even more fleshy goodness with brand new areas and content in single-player mode.

Originally a limited mode accessible only via a secret seed, fan demand pushed A Robot Named Fight! creator Matt Bitner to evolve Deathmatch into a prominent game feature. This new game mode pits up to four players against one another, each controlling their own version of the titular robot Fight in this couch co-op blaster brawl. After choosing from any of the five hand-crafted arenas, players are afforded an opportunity to start with three Artifacts chosen via roulette—just how generous will the gods be? Once the action starts, explore and retrieve additional firepower and randomly generated upgrades (orbs, vorbs and morebs!) to hunt down and destroy your opponents. Work against a countdown timer or toward a kill-count while dodging a relentless barrage of laser beams, wave bombs, and buzzsaws.

Are you Fight enough?

Deathmatch is a free update included in A Robot Named Fight! Download today on the Nintendo eShopTM and Steam.

To get that A Robot Named Fight! fix and stay up-to-date on our other fresh Indie titles, follow us on Twitter and join our official Discord!

Want more info on A Robot Named Fight? Check out our press kit!!