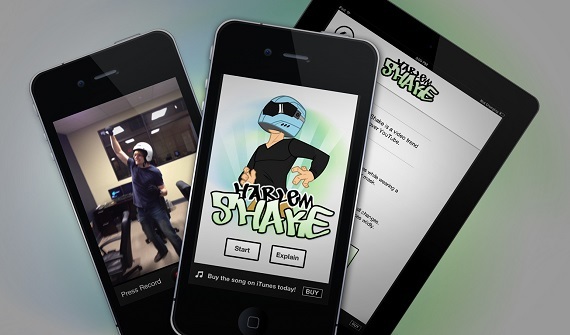 After much laughter and consideration, we decided as an agency to expand upon the YouTube sensation by developing the first ever Harlem Shake App for iOS. The Harlem Shake is an internet meme that originated on January 30th, 2013 with a video released by YouTube comedy vlogger Filthy Frank set to music by heavy bass artist Baauer. The meme gained popularity days later after five Australian teenagers known as 'The Sunny Coast Skate' created several Harlem Shake videos that went viral on February 5th.

As a result of this, Harlem Shake videos began being uploaded from across the world featuring companies, colleges, comedy shows, celebrities and even some underneath the water. Knowing the success and participation that the Harlem Shake has created, we decided to create an app that allows the end user to create their own Harlem Shake video instantly. The app allows the user to film videos in two takes with an automatic countdown timer and instant music overlay that’s immediately synced for them. Then simply export to the phone's photo album or share with all your friends that just have to see you "get your shake on." We heard from multiple sources that many users wanted to participate by making their own video but did not have or have access to the technical skills to produce one for themselves. We decided to help eliminate this hindrance and developed the app with simplicity in mind.

The app was envisioned, designed and developed in a very short time to ensure it came within the popularity of the movement. Both in function and creativity, we wanted to allow the already viral phenomenon to reach your mobile phone and allow even more hilarious shakes! Knowing that no other developer has yet to create an app to allow for greater participation in this movement, it was a no-brainer for us to release this to the public to hopefully be responsible for continuing the sensation and increasing the amount of videos shared online.

Try it out for free here and share your own Harlem Shake!