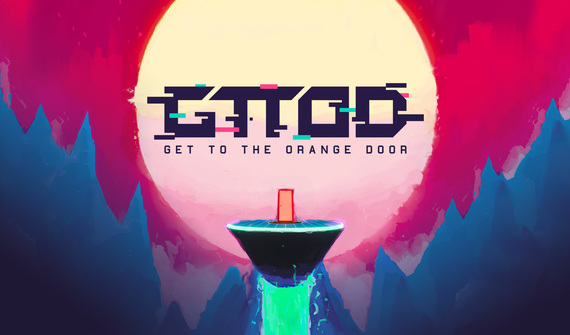 Get to the Orange Door: Already a Cult Classic

Hitcents has teamed up with Arcade Coin to help publish Get to the Orange Door, a parkour-heavy run-and-gun FPS 3D platformer with one main objective: Get to the Orange Door. GTTOD is slated to launch on Nintendo SwitchTM and Steam late Q3 2019. Look for it at PAX East 2019 Booth #21019 to play the unique demo and score some merch!

Cast in the vivid neon and chrome retro-futuristic aesthetic of the 80’s, GTTOD is an adrenaline-pumping rogue-lite FPS boasting some pretty gnarly parkour abilities. Inspired both by modern shooters like Titanfall 2 and the Halo franchise as well as classics like the original DOOM, GTTOD embraces the healthy marriage of solid FPS mechanics and freedom of movement. Wall run, slide, and dash your way fluidly across obstacles, using jump pads, boosters, and equipped items to reach mach speeds. And that’s just half the fun. As you freerun around the lambently lit levels, use a diverse arsenal of weaponry to mow down baddies. Keep an eye out for vending machines and crates to score even more guns, gear, and goodies. But never forget your main quest, the objective is in the title: Get to the Orange Door.

Using a unique system of Burn Cards to choose starting weapons, equipment, and game modifiers, GTTOD is engaging with every playthrough. Replays are encouraged and rewarded, with additional Burn Cards unlocked on each additional run. GTTOD also offers an array of game modes, which are found via the title screen or by unlocking unique Burn Cards. Some game modes can change the entire way the game is played—such as Ninja, a sword-only run—or, like in Quickplay, a random level is booted up with random equipment. There is also an integrated level editor with workshop support.

The developer of GTTOD, Arcade Coin, is a studio located in the midwestern United States owned and operated by independent game developer, Andrew Smith. Inspired by an avid love of all things FPS, Andrew began creating games fresh out of high school, dedicating his time to imbuing advanced FPS mechanics with Arcade-styled neo-retro flavor. Having already garnered a solid Discord following under his studio name, Andrew’s work on GTTOD, his first big game, is being met with nothing but enthusiasm by his active, verbal fanbase.

While GTTOD is still in development, it already boasts a fully-fleshed-out Discord with a large, enthusiastic fanbase. With this much support, there’s no denying that it’ll quickly become a cult classic among FPS fans. Speaking of cults, there may or may not be a cult dedicated to a crab named Reginald on the Discord—and that’s just one of the cults. Chat on Arcade Coin’s official Discord or Hitcents’ official Discord and follow us on Twitter to stay up-to-date on GTTOD’s development. Our Discord members always get access to juicy game info before everyone else.