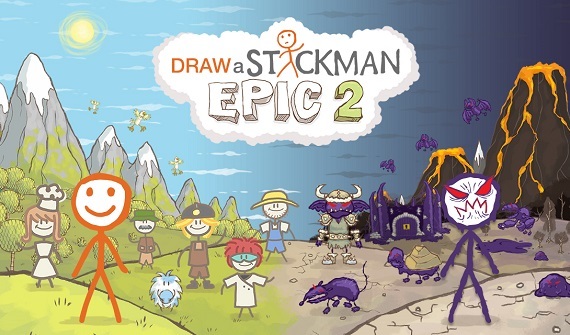 Kentucky’s Hitcents wants to fire your imagination with Draw a Stickman: Epic 2

Hitcents is launching its Draw a Stickman: Epic 2 today, a mobile game that is a sequel to a 2012 title that has been played more than 100 million times. It's a quirky title, and it is a rare title that comes from a big family-run indie game company based in Bowling Green, Ky.

Kentucky doesn't have many creators of mobile games. But the Bluegrass state has a hit maker in Hitcents, a mobile-gaming company that has a global reach and that is further proof that you can create awesome mobile games anywhere in the world. Hitcents has hundreds of employees in Kentucky, as well as Los Angeles, San Francisco, and Shanghai.

Originally founded in 1999 as a software company by twin brothers, Chris and Clinton Mills, Hitcents has grown from a small home office into a globally successful enterprise. The company grew big as a creative agency and app developer, but now it is transforming itself into a mobile-gaming company. Macy Mills, the sister of the founders and the director of strategic partnerships, runs the San Francisco office while her father Ed, the chief financial officer and co-owner, is based in Los Angeles.

In 2012, the company scored with Draw a Stickman: Epic, where you can draw your own stick figure on a touch screen and use it as the main character in the game. You have to sketch things to get out danger and guide your stickman (or stickwoman) through the world. You can draw weapons such as a sword and use it to hack off the heads of enemies. It's a creative melding of drawing and gaming, and it takes you on an adventure where you have to help create the art and the story. Draw a Stickman: Epic 2 is actually the fourth title in the series, but it has a storyline that makes it the sequel to the first title.

Hitcents has made a number of mobile games, but Draw a Stickman: Epic was the biggest hit so far, Macy Mills said. That's why the team spent a few years developing the sequel, which is launching on multiple devices today. The new game has brand new illustrations and more ways for you to draw things that come to life. You are given complete freedom to explore unique and colorful environments. You can battle villains, uncover hidden treasures, traverse environments, and personalize the characters and tools in the game.

Hitcents has also created Draw a Stickman: Sketchbook, a free companion app that lets you run wild with your drawings.

Draw a Stickman: Epic 2 is debuting today for $3 on the Apple App Store, Google Play, the Amazon App Store, the Windows store, and Windows Phone. Hitcents also made a name for itself when it launched Hanx Writer in 2014. The app from actor Tom Hanks re-created the experience of using a manual typewriter, and it became No. 1 in over 50 countries on the iPad.

Clinton Mills, the cofounder of Hitcents, said in a statement that the company listened to fan feedback and took its drawing mechanic to the next level. It will be interesting to see if it becomes a hit. Rivals such as Zynga's Draw Something have been big hits in the drawing-game space, but Draw Something 2 fizzled after getting too much hype. Getting it right isn't easy.